Up until now I have used modern dyes to dye my leather, colour-matched  to produce an authentic range of colours, but I wanted to experiment with authentic dyes to see how easy they are to make and use.

I therefore did some digging around and found references to the processes for making black and brown dyes. These are the most common colours we see in illustrations, painting and manuscripts. I’ve established that to get a red dye they used kermes, but this is hideously expensive and I don’t have any other information about the process, so that’s on hold at the moment.

Walnut shells are well known as a wood dye and I found references to leather dyed with them dating back to the 1300s. The crushed, roasted shells are soaked in water, giving a dark brown solution. The dye can then be rubbed into the surface of the leather. 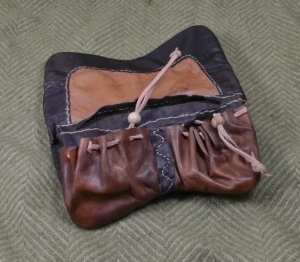 Two sections of the purse above are dyed brown: the front pouches and the inner lining. Although different shades, both were dyed with the walnut dye. The main difference between the two shades is the number of times the dye was applied: more applications gives a deeper colour. 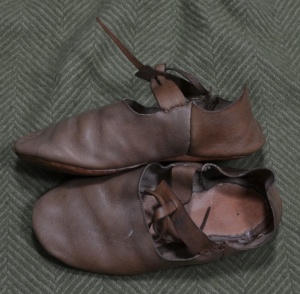 These shoes were also authentically dyed, but they were then soaked in water so that they would stretch around the owner’s feet. The walnut dye is not as colour-fast as modern dyes and a good deal of the colour leached out in water. After oiling they did not lose any further colour, despite going through plenty of puddles when in use.

Black leather seems to have become increasingly common in the later Middle Ages, based on visual evidence from paintings (the Renaissance in art is well established by this point, so they are aiming to produce life-like colours). It is most common on pouches, belts and dagger scabbards, potentially for decorative effect. It seems to be rare on shoes, possibly because they wore out too quickly to be worth it (see below).

To dye leather black, you need acid, iron, and a tannin, just as you do when creating black ink. The leather has already got  tannin in it from the tanning process and simply dyeing in an iron pot would provide the iron, just as dyeing weld in an iron pot produces green instead of yellow.

The purpose of the acid is effectively to rust the iron, however, so rather than damage a pot I soaked iron wire in a vinegar solution in a glass dish, and then submerged the leather in it. The impact on the leather was rapid: within an hour it was already turning a blue-grey. It dyed best when floating just below the surface of the water, presumably because it was more exposed to the air. Where layers of leather overlapped, the lower layer didn’t dye as well.

I took it out after two weeks as if you leave it in too long, the acid will eat away at the leather, causing it to decay. At this point it was a deep blue-black which, after oiling, came up as the intense black shown below. Unlike with a modern dye, iron and vinegar turned the leather black right through, rather than just the surface. 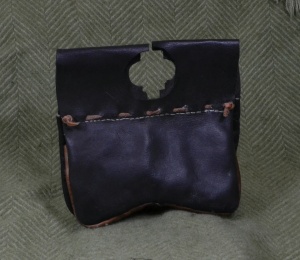 I mentioned above that it may not have been worth dyeing shoes black because they wore out too quickly. As it took two weeks to get a deep black, black leather would have been very expensive and therefore not worth using on a comparatively short-lived item such as shoes.